Do you hate the feel of bodyboarding fins on your feet?

Maybe your fins are so old they’ve been torn apart. Or perhaps you weren’t wearing leashes and they were swept into the middle of the ocean.

Okay, so you don’t want to wear the best bodyboard fins when riding waves, but first let’s see if that’s even possible.

Can You Bodyboard Without Fins?

How To Bodyboard Without Fins

Different rules apply when you bodyboard without fins. If you don’t follow them you won’t have a great time and you could put yourself in danger. Here are the top things everyone should know about before paddling into the surf with their bare feet:

Extra arm and leg power – A lot of people assume the bodyboard is the most important tool in your arsenal. It’s not true. If you want to maximize your bodyboarding potential everything revolves around your arms and legs. Think about how you’re even going to catch waves.

You’ll need to start building a lot more power in your arms and legs if you want to keep catching waves. Without bodyboarding fins you’ll have to get used to the fact you’ll miss more than anyone else. But extra strength won’t leave you too far behind.

If you want to stay in the water for hours like usual you’ll need to build up a good endurance base too.

Use the right bodyboard – Anyone who doesn’t wear fins will need to use the best beginner bodyboard at the very least. Bodyboarding flippers have a huge impact on things like control and speed, so you’ll need to make up for the loss in those departments.

Thanks to perfectly engineered features on great bodyboards they’ll help greatly with things like control and speed. Although you would be better with both pieces of equipment one is better than nothing. Here are a few crucial features you’ll come to rely on:

A superior slick – Slicks help create as little friction as possible when you’re flying around in the water. You’ll need a good one to ensure you don’t go too slow if you don’t have bodyboard fins to perform powerful kicks.

The perfect tail – A crescent tail is excellent because it will be able to give you more speed in the water. The tail has a noticeable impact on control too. Both things which you’ll need even more now without flippers.

Grippy channels – If your board has channels you’ll have extra grip when riding on waves. It will help with stability and you won’t shoot off in random directions. More grip is crucial when bodyboarding with bare feet.

Ideal rail ratio – Bodyboards come with different rail ratios, but they’re there to give you a boost in control and speed. It’s a great feature to have when combined with the others we’ve talked about today.

If you’re interested in a great board that will help when you don’t have fins you should check out the Custom X Titan bodyboard. 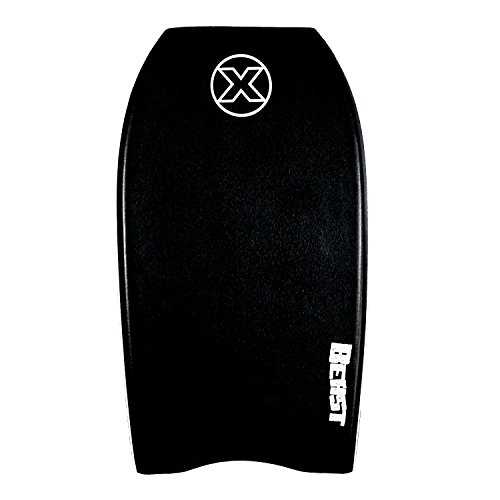 Stick to smaller waves – When talking about features you might have noticed we didn’t mention anything about a strong core or power rod stringers. It’s because you should stay far away from big waves, so you shouldn’t expect to take much of a pounding in the future.

There is obviously nothing stopping you from attempting to ride big waves, but doing so without the ability to control your speed or perform quick maneuvers is very dangerous. It will feel like trying to ride an aggressive bull without holding onto anything.

It’s not the end of the world. You can still have an enjoyable time messing around on smaller waves closer to shore.

Work hard on balance – When waves start pushing you around you’ll be tossed into the water. Bodyboarding fins always help with this because they allow you to remain balanced on the wave. Luckily, balance is one of the things you can work on even if you don’t have flippers.

Excellent balance will also help you ride a bodyboard using different styles, which we’ll touch on in more detail later on.

Biggest Negatives Of Bodyboarding Without Fins

Before you decide to give up on bodyboarding fins forever, I’d like to point out a few of the biggest negatives. Hopefully it will persuade you to start wearing them a few years down the line. Let’s look at a couple of the biggest things you’ll be saying goodbye to:

1 – Riding big waves – Small waves become boring after a while and you eventually crave big ones. You definitely won’t be able to thunder along inside the barrel of a wave thinking it’s going to crash down on you at any moment. You won’t even be able to ride medium-sized waves to your max potential.

2 – Performing cool tricks – Some people believe being stuck on small waves is okay because they can work on tricks. I’m sorry to say it’s not exactly true. Even though you’ll be able to perform some you’ll be severely limited in the ‘cool tricks’ department.

Here are a few examples so you’ll understand:

Big airs – How many bodyboarders have you seen shoot into the air before? There is nothing quite like flying through the air on a bodyboard. With the right speed thanks to extra kicking power you’ll achieve more height allowing you to do mad tricks while mid-air. 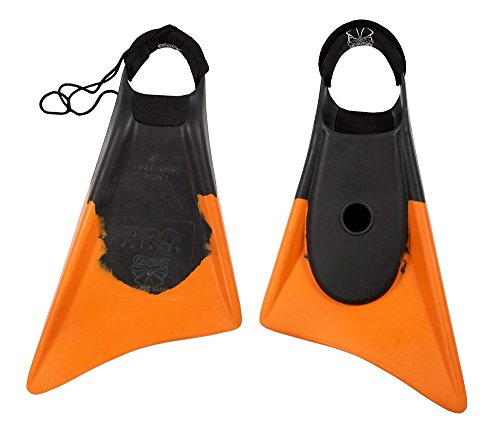 360 degree spins – When performing spins you need to lift your feet into the air to achieve a low center of gravity, but you’ll still need bodyboarding flippers to do the trick effectively. Before doing a 360 you need to use fins to adjust your speed.

You’ll also need them to gain control of yourself after spinning around. Control is actually the main key to success. It will help you get into the right position and once you’re finished you will be able to continue riding the wave.

We’ve only mentioned a couple of tricks but I’m sure you get the point. Thankfully, there are still a few cool challenging things you’ll be able to work on.

There are three main styles of bodyboarding, but I’m sure you’ve only really heard about one. Lying down riding waves in the prone position is the most popular by miles. But here are a couple you’ll be able to work on without bodyboarding fins:

The fact it will be harder might be a good thing. We all know the journey is more enjoyable than the ending and it will take you longer to get it right.

Stand up bodyboarding – If you have the right bodyboard you’ll be able to stand up on it like a surfboard. Except it’s harder because your board is smaller and doesn’t have fins. Once you learn to stand up on your bodyboard while riding waves you can attempt a few tricks.

Spinning on the waves while flying towards the shore is particularly challenging.

How To Bodyboard Without Fins Successfully

Follow the advice we’ve talked about today and you’ll be able to bodyboard without fins. If you’re a good swimmer it’s still okay to attempt riding slightly bigger waves. Just be careful how hard you push yourself because they can become dangerous without flippers.

Once you get sick and tired of riding smaller waves begin learning how to drop knee bodyboard or ride standing up.